Getting your C++ to the Web with Node.js

So, you’ve got some old C or C++ code, playing an important role in your business - but you desperately want to get that functionality on the web - maybe just internally to streamline your workflow, or maybe publically in order to fulfill some other goal. The problem, of course, is that C++ isn’t exactly easy to put onto the web - so what are your options? This post is kicking off a series dedicated to showing you how to take your legacy (or new) C/C++ code to the web by integrating it with Node.js. In a previous series I detailed one option - Node.js Addons - but in this series I’m covering a few more, along with giving you some guidance on which method might be best in your situation.

Well… yes - you could! People have been writing parts of web applications in C++ for a very long time - using CGI. If you want to take a look, check out the notes at the end of the post for some starting points. CGI isn’t the most popular thing on the web these days though, it lacks a lot of productivity enhancements that makes web development so great today. More importantly, it introduces some significant performance and scalability issues. On the other hand, C++ has come a long way over the past few years in terms of expressiveness, and the C++14 standard has enabled a some really cool projects focused on writing modern MVC-styled web apps in pure C++. If that’s your thing, check out Silicon.

The majority of web developers aren’t C++ programmers, and frankly, unless ultra high performance from your web tier is critical, you are probably better off using languages providing a higher level of abstraction. The common players on the web being Ruby, Go, Node.js, Python, PHP along with many more…

The first answer is… I like it. Seriously though, Node.js has a number of advantages. For one, it integrates really nicely with C++ in several different ways - which this post will outline. In general, Node.js also has a lot of benefits that dovetail with why you’d be using C++ in the first place - it’s highly portable, it promotes performance at scale, and has a thriving ecosystem.

Why not just rewrite the C++?

Ah… every developer’s first instinct - “Let’s rewrite this old code written in language X because language Y is so much cooler | better | faster | easier!”. First off - if you have some legacy C++ code that is simple, small, and doesn’t really need to be high performance - this might very well be the best answer. However, if you are in that category, you probably aren’t reading this - you’re likely almost done rewriting your C++ code.

There are a few practical reasons not to rewrite code. First, you might not have the code! Believe it or not, if you are working for a company that uses legacy tools to support their business, source code for these tools are often lost to time (I’ve seen this a bunch of times when working with engineering firms). A derivative of this is when your legacy code uses third-parth dependencies, which cannot be rewritten or modified.

Second, C/C++ can be complex - and if it’s old, it might be really hard to decipher. Are you a web developer that is also a C++ guru? Are you positive you can completely recreate the precise inputs/outputes of this program? If it’s a critical line of business tool, you are putting a ton of risk on your plate.

The third reason not to rewrite your C++ is because it might really want to be in C++! While Node.js has decent performance, it’s simply not C/C++. If your application has extreme performance criteria, you aren’t going to beat C++.

C++ and Node.js - your options

I’ve come up with three general ways of integrating C++ code with a Node.js application - although there are lots of variations within each category:

Each of these options have their advantages and disadvantages, they primarily differ in the degree in which you need to modify your C++, the performance hit you are willing to take when calling C++, and your familiarity / comfort in dealing with Node.js and the V8 API.

The most obvious question to ask first is do you have access to the C++ source, or just the binary? Without source code, you need to hope the C++ program is either a command line program or a dll/lib shared library. If you are looking at a program written with only a graphical user interface… well then you are in a world of pain. It’s likely you are going to need to rewrite your application in order to make it work on the web.

If your C++ runs as a standalone from a command line, you don’t need the source code to take advantage of Option 1 - the automation option. You can run your C++ program unaltered, using Node’s child process API. This option works for bringing just about anything to the web - it really doesn’t make a difference what language your command line program is written in if you are simply running it. If you are reading this hoping to get C code, Fortran code, or some other language onto the web - then this option is worth reading. I’ll discuss this in the next post, which you can read here.

The automation option is not only for those without the underlying C++ code. If you have C++ code that either is currently, or could easily be turned into, a command line program - then this option is reasonable if you can live with the performance, and you don’t really want to get into the hassles of language integration.

If you are dealing with a C++ dll/lib, or you have the C++ source code and can make modest modifications in order to create a shared library, then the shared library approach might work well for you. I’ll detail how you can do this using the Foreign Function Interface module in the third post of this series. This option gives you more fine-grain control of how you integrate C++ into Node, because calls to C++ routines can be interleaved with Node.js code itself. While this approach brings you closer to full integration, you still have to deal with type conversions and blocking (see here for asyc with ffi) when calling C++. It’s a great option if you want better integration, without investing a lot of time dealing with V8. This option is the subject of the third post in this series.

If you have the C++ source code, and you are willing to learn a bit about Node.js Addons, then a third option is creating a native Node.js module out of your C++. While this is the more challenging approach, you gain a ton of flexibility and performance. You also have the option to call your C++ asynchronously so you don’t block your web application’s event-loop while your C++ is crunching numbers. The fourth post in this series covers this option using the Nan library. I’ve also written about addons in previous posts (see Notes below). While we’re at it, I’ve also published an ebook that covers this in much more detail - check it out!

Throughout the next three posts in this series I’ll be showing you examples of how to implement each of the options above. I want to use the same basic example in each. Prime numbers are extremely important for lots of stuff (i.e. cryptography), and their generation tends to be really computationally expensive. A quick search online will direct you mostly towards C and C++ implementations - and the really efficient ones are complicated. Looking at their source, you’ll instantly recognize that you probably don’t’ want to rewrite them - unless you are just looking for a challenge - which is fine:).

One of the more effective algorithms is called Sieve of Eratosthenes. There is a really popular C++ suite, primseieve - but it’s pretty complicated to build. Instead, I found a simpler implementation that is more suitable for our purposes. You can find the source code for it here, but it’s also in the git repository for this blog series.

Animation of Sieve of Eratosthenes - https://en.wikipedia.org/wiki/Sieve_of_Eratosthenes

Throughout this series I’ll use the exact same Node.js web application. It’s pretty bare-bones, there is a single HTML page with some JavaScript (AngularJS) that asks the web server for prime numbers under a user specified value. The web server responds with a JSON object containing the primes - computed using one of the several techniques I’ll implement.

I assume the reader has some basic understanding of a Node.js web app. I created the app with Express on the backend and AngularJS on the frontend, but I stayed away from any complexity and eye/candy as to not distract from the purpose of these tutorials. It’s also a great setup for an API into your C++ code - just ditch the UI!

To get started - clone my github repository and check out tag “start”.

You can poke around the web app yourself - but the relevant bits are the front end - found in /web/views and the backend, found in /index.js and /routes.

Let’s take a quick look at /index.js. The first ten lines or so are just boilerplate express code:

The next line line is building an array of “types” - which will eventually hold entries for each example in the post series. For now, we only have one - a Node.js primesieve implementation.

Each of the entries in types will correspond to a route, found in the /routes directory. These are loaded dynamically from index.js and the web server is started by the final hand full of lines.

To launch the web server, navigate to the /web directory in your terminal and type the following:

You need Node 0.12 or greater to be installed.

Now point your browser to http://localhost:3000. You’ll get the index page, which lists the implementation options. For now, you’ll just have one option - “pure_node”. Click on it, and you’ll see a page with a single number box. Type 100 and submit - and the Node.js implementation of primesieve will run and return all prime numbers under 100.

The primesieve implementation in Node.js is found in routes/pure_node.js. By comparison to the C implementation we’ll use throughout the remainder of this series, it’s mind-numbingly simple - but it gets the job done! The code that handles the actual response is the router’s post method:

This post is kicking off a series where we’ll dive into all three options for integrating C++ into Node.js - (1) automation, (2) shared library, and (3) addons. I’ve outlined why you’d choose each one, and shown you the basic example I’ll be extending throughout the series. In the next post, we’ll take a closer look at automation option.

If you are looking for additional information about anything I talked about above, here are some links that might help you. Let me know if I’m missing anything!

Why not rewrite legacy code? 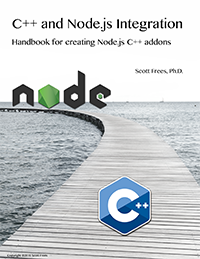